The Inn Game and Sins of Kot-Do-Init 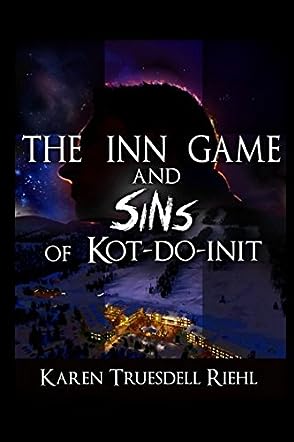 Although I cursed it in my youth, dyslexia turned out to be a blessing in disguise. Not being able to read or write until the age of ten forced me to express myself through acting. At the Stephens College playhouse in Missouri I fell in love with an actor, a married actor. That experience led to the publication of my first book, Love and Madness: My Private Years with George C. Scott.

When I found myself pregnant. George wanted me to abort the baby. I refused. My friend Tammy Grimes, who later became a two-time Tony Award winner (The Unsinkable Molly Brown and Private Lives) helped me find the Florence Crittenden Home for Unwed Mothers outside of Boston, where I gave birth to our daughter. My play, Bad Girl, was based on that experience.

I was inspired to write The Inn Game by my experience as an innkeeper's wife in North Conway, NH. It's a tale of small town intrigue.

The Inn Game and Sins of Kot-Do-Init: Roger Sundbee Returns is a cozy mystery novel written by Karen Truesdell Riehl. Kot-Do-Init is a small town in New Hampshire with a rich and somewhat hilarious history, whose legacy is shared by many of the current residents. The small and relatively sheltered community has little to occupy themselves with during the off-season when the population shrinks to about half prime-season occupancy. Rumors run rampant throughout the excitement-starved little town, and so the arrest of the Kot-Do-Init Inn’s new bellboy, after a shopping bag full of women's underwear in varying shades of pink was found in his closet, was elevated to the status of a current event. Pam and Michael Tatum were resigned to the situation, but their inn would be facing vastly more serious challenges when a body was found beneath the Kot Mountain ski mobile. Two people had fallen off the ski mobile while indulging in the town's favorite off-season activity. Claire, Harry Dynor's wife, had survived, but Jim White died, leaving his wife, Ruth, distraught. As the news spread across the country and the inn’s cancelled reservations started mounting up, newcomer Roger Sundbee, nephew of the editor of Kot-Do-Init's weekly newspaper, had his investigative hands full for his first part-time assignment in town.

Karen Truesdell Riehl's cozy mystery, The Inn Game and Sins of Kot-Do-Init: Roger Sundbee Returns, presents an intriguing character study of a small New England resort town in the 1970s. Pam Tatum has to be one of my favorite cozy mystery characters. I loved seeing her take on the clients who come to stay at the inn, especially the Roosevelt sisters and their chauffeur, Mr. Charles, whose friendship with a young girl from town, Sarah Jameson, is marvelous. Following Roger Sundbee's impromptu partnership with Abenaki Indian Chief Richard was also a high point for me in this entertaining and gently humorous novel. The Inn Game and Sins of Kot-Do-Init: Roger Sundbee Returns offers the reader mystery, small-town gossip and goings-on, and the natural beauty of New England, and it's highly recommended.

Michael and Pam Tatum, owners of the Kot-Do-Init Inn in a small New Hampshire village, are the central characters in this amusing, and often perilous, story. The residents depend on the tourist traffic, and cancellations begin after the death of one of its own. Jim White died in a ski-mobile accident; he, a married man, was with Claire Dynor, a married woman. The Happy Morning Café, where all the locals meet, is abuzz with the news. Sam Bennings, the local newspaper reporter and investigator, is determined to find the true story behind Jim’s death. Roger Sundbee, a freelance investigative reporter, joins the pursuit. Karen Truesdell Riehl has penned a fascinating “whodunit” story in the fictional work, The Inn Game and Sins of Kot-Do-Init: Roger Sundbee Returns.

While many characters comprise this story, it is easy to keep track of each person’s motives and characteristics, due to this author’s story-telling skills. The reader can easily imagine each person, due to the realistic personalities and dialogues. Because the writing flows smoothly, the book is an easy and enjoyable read. Another interesting facet is how the author sets the stage of this modern-day tale of murder and affairs with the founding of the town four hundred years earlier. In The Inn Game and Sins of Kot-Do-Init: Roger Sundbee Returns, Karen Truesdell Riehl develops an engaging and yet thought-provoking tale. Is it possible that the origins of our towns have an everlasting effect on its residents? The early life history of the murderer is also at the core of the tale. There are many levels of wisdom within this fun novel – and that is one of the joys of this book.

The Inn Game and Sins of Kot-Do-Init by Karen Truesdell Riehl is a fiction novel that will appeal most to adults and young adults who are looking for an entertaining story to lose themselves in for an hour or two. The Inn Game and Sins of Kot-Do-Init takes place in the 1970s in a village of legend known as the village of Kot-Do-Init. The village was named Kot-Do-Init because its founder was caught “doing it” with the cook from an Indian tribe, and he was promptly banished from the tribe. The story takes place during tourist season in 1970 and follows various members of the town. The connecting factor of these different townspeople is the hunt for a lunatic and the constant swirling of all sorts of juicy rumors.