Stand For Something or Stand For Nothing 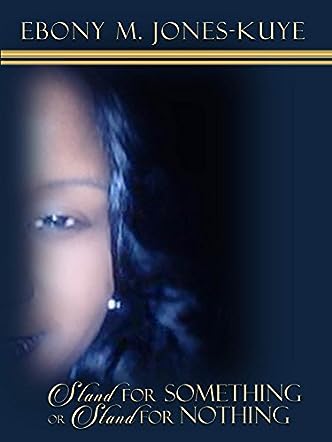 Ebony Jones-Kuye is a lifelong Los Angeles resident who loves Thriller movies and learning about History. In between working in HR Recruiting, hanging with her husband and daughter, and being active in Top Ladies of Distinction which is a non-profit humanitarian organization, she has found the time to write her first book which is a true life story based on real events that happen in her life. Ebony and her mother faced devastating situations and not only fought to hold on to each other through poverty, discrimination, physical disabilities, death, but also to stand strong against the opposition that threatened to make them feel small and invisible...former NBA Clippers owner Donald Sterling.

Her first book, Stand For Something or Stand For Nothing has already received excellent reviews on Amazon and Goodreads since it was released on July 27th. She is working on her second book which will be based on her experience in West Africa. It will come out in Spring of 2016.

Also view my press conference with Gloria Allred on youtube discussing the horrible ordeal that my mother and I went through 12 years ago: https://www.youtube.com/watch?v=EZbEVNQh5tQ&feature=youtu.be
Show Less

Stand For Something or Stand For Nothing is a nonfiction autobiographical work written by Ebony Jones-Kuye. The author’s earliest memories of her family were of a cozy and connected threesome. There was her mother, a successful hairstylist with her own business, her half-brother, Chucky, and her. Chucky, who was 21 years old and disabled by a debilitating and painful case of Sickle Cell Anemia, was everything to Ebony. He took her to school and, afterwards, for a snack before they went home, and he came to seem like a father for the 4-year-old girl. The three of them lived in The Princess Apartments in mid-Los Angeles. It was a nice apartment with good neighbors who were, in many ways, more like an extension of family. Chucky had gotten involved with the Crips, however, so their mother decided they would move to her home state of Texas to get him away from the gang culture. Life in Dallas, Texas was radically different from what they had experienced in Los Angeles. Ebony had always been enrolled in private schools and now had to contend with a public school situation where she was ostracized and made to feel like an intruder. Then tragedy struck, and Chucky was shot in front of their Aunt Freda’s house, and things would never be the same again.

Ebony Jones-Kuye’s autobiography, Stand For Something or Stand For Nothing, is a frank and moving account of her life growing up in the 1970s and '80s in Los Angeles. This nonfiction account reads beautifully, and, at times, I marvelled at the author’s skill in telling her story in such a way that the reader is drawn into everything that happened to her and her mother. I mourned at the news of Chucky’s passing and cheered as Ebony’s intellectual accomplishments were recognized in primary and secondary school. The section of her story that is referred to in the title, namely, the housing battle with Donald Sterling, who essentially denied services to tenants on the grounds of race, reads like a legal thriller. Jones-Kuye states that she wants her story to be an inspiration for others, and, to my mind, she has succeeded brilliantly. Her story is compelling, inspiring and very readable. Stand For Something or Stand For Nothing is most highly recommended.