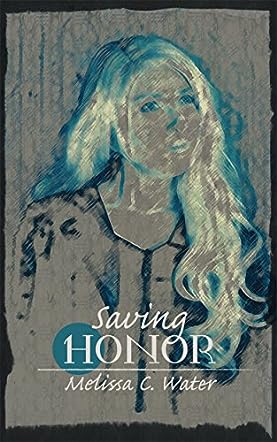 Melissa C. Water was born and raised in a small town in Quebec, Canada. She grew up trying to write novels but never finished them. Her High School English writing teacher inspired her to continue to write poetry and stories, and also inspired her to believe in her abilities as an author.

Melissa wrote her memoir of her time in a psychiatric ward for self-harm and bulimia, as well as writing a comical yet dramatic science fiction series for young adults. Today Melissa lives in Montreal, Quebec. She is a mental health activist who raises awareness on YouTube for multiple mental health conditions, and the neurological condition known as Tourette Syndrome. She appears on YouTube as Idranktheseawater.

Saving Honor is a novel by Melissa C. Water, presented in an extraordinary first-person narrative. Honor O’Neill is plagued by strange visions on a daily basis. A seventeen-year-old victim of high school bullies, she sometimes pictures herself getting revenge. When one of those revenge scenarios plays out just seconds after she had thought about it, Honor starts to wonder if she really is the freak that the bullies make her out to be. After questioning her own sanity, Honor is taken to the hospital, only to discover that not only can she read people’s minds, but she can now also will things to happen just by thinking it. As Honor’s life starts spiraling out of control, she meets Caden, a former student, who asks her out on a date. Honor soon discovers how her abilities came about and what they’d been designed for, and she is not happy. Wishing for her old life back, Honor needs to make some very important decisions about her future, in the hopes that she can regain some semblance of control.

It is rare to come across a book written in the first-person narrative which actually works. Saving Honor has done just that, enabling the reader to hear and see what Honor sees, as well as having deep insight into her thoughts and feelings. Saving Honor is very well written and the characters are easy to relate to, even in a story so bizarre. Each page brings a new layer in the mystery of Honor’s awakening gifts. Melissa C. Water has shown herself to be a linguistic mastermind when combining the realistic with the supernatural. This book would be suitable for those who love a good mystery, some drama and a few laughs, and who can empathize with the underdog in a world where strange things can happen.