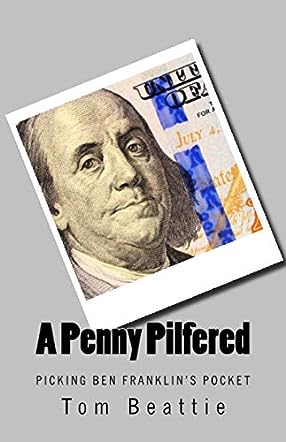 Tom Beattie is a self-publisher author and two-time Pinnacle Award Winner. He lives in Rhode Island with his husband David.

A Penny Pilfered: Picking Ben Franklin's Pocket is an historical biography written by Tom Beattie. Who was Ben Franklin? He looms large in the annals of American history, as indeed Beattie’s biography demonstrates that he should, but Beattie’s work also shows how little most Americans actually know about this enigmatic and clever man. And while there have already been numerous biographies written about Ben Franklin none, I would venture to guess, have captured the spirit of the man in quite the same way as Tom Beattie does in this often humorous, irrepressible and very entertaining work.

I had no idea that Franklin was the 15th of 17 children sired by his father, nor that he was indentured to a rather cruel and unpleasant older brother, James, when he was 12 years old. James was a printer, which meant he also created material and disseminated information. That indentureship, which ended when Franklin ran away after finally despairing of his ill-treatment, did give Ben his start in the printing business at least. And I was amused, and not a little surprised, to discover that Franklin’s kite and key experiment didn’t kill him only because he hadn’t actually attracted a lightning strike, but rather felt the impact of the electrical charges in the stormy air. Still, I’ve always loved that image of the man gallantly flying his kite in the midst of a roaring good thunderstorm.

Throughout A Penny Pilfered, Beattie gives us his take on what passes for politics now and imagines, along with many of us, what Ben would have thought of the way government is conducted today. He also shows us a Ben Franklin unadorned by trappings and owning up to both his bad and good sides. Having read Beattie’s other books, I knew this would be both a special treat and an easily accessible educational experience, and he proved me right once again. My favorite part of this book? That’s easy. While I loved the history and the commentary, and appreciate the extensive bibliography and photos, The Mistletoe: Or No Ugly Loves: A Ben Franklin Christmas Tale made me smile as I read it, and I’m still smiling now just thinking about it. If you’ve read other Tom Beattie books, you'll know to get this one and settle in for a grand read. If you haven’t, you’re in for a rare treat. A Penny Pilfered: Picking Ben Franklin's Pocket is most highly recommended.

A Penny Pilfered: Picking Ben Franklin's Pocket by Tom Beattie is an interesting, hilarious biography of one of the most important personalities in US history, one of America’s founding fathers —Benjamin Franklin. What made this son of a candle maker who immigrated to the colonies different? In this biography, readers are introduced to an unusual kind of humor — perhaps reminiscent of the good-natured character of Ben Franklin —and the author has done an impeccable job in recreating an atmosphere that captures the political and social climates of the time. The humor is enjoyable and I liked how Tom Beattie conveyed the intelligence of this character. It is interesting to follow Franklin's journey as he pursues his dream, moving from Boston to New York, and discovering what makes him tick as he becomes engrossed in the pursuit of social and political change and an advocate for unity.

This book is hard to summarize because of the author’s unique style of presentation. It's not a run-of-the-mill kind of biography, but a great book that explores the life of a man who has marked history, an American printer and publisher, a scientist and inventor, and one of the brains behind the drafting and signing of the Declaration of Independence. In this memoir, the author captures the essence of the man, making relevant allusions to history, to texts by Franklin, and punctuating the whole work with anecdotes, events that are sometimes captured with an intriguing and hyperbolic tone. But is the man written about in these pages the same Franklin known to historians? This is for the reader to find out. But there is a lot to relish in this writing — the short pithy chapters, the endearing sense of humor that permeates the work, and excerpts from the writings of Ben Franklin which will remind readers of the focus of the story. A Penny Pilfered: Picking Ben Franklin's Pocket is well researched and hugely entertaining.

Benjamin Franklin is someone that we always hear about, and it makes sense since he was one of the founding fathers of our country. But there was so much more to him than any of us ever knew. In fact, he was just like any of us, or at least we can imagine that he was. What if he was really just like us? What if he had the same thoughts and opinions? What if he wondered about the world around him or his own life and future? Well, he is definitely just like that in A Penny Pilfered: Picking Ben Franklin's Pocket by Tom Beattie. Whether you’re learning about Ben Franklin or you’re checking out more about some of his friends and the many people he met along the way, you’ll be getting a fun look at history and more.

In this book, you get to meet Benjamin Franklin as a real person, as someone who had the same trials and tribulations and even the same fun and enjoyment as any of us. You’ll get to check out just what it took for him to get through his own life, and a few little amusing stories thrown in just for the fun of it. Sure, we don’t really know what Ben Franklin went through or what he might have thought about those situations (at least not all of them), but in this set of short stories, you’re definitely going to enjoy imagining it. A Penny Pilfered by Tom Beattie is a novel way to think about one of the most important men in our history.