Ghost Of A Chance 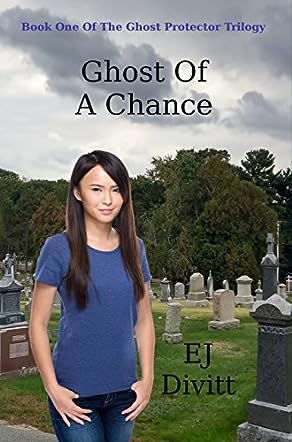 EJ Divitt lives with her husband in a house she plans to live in forever. EJ is an insurance agent by day who spends her free time writing. She has multiple nonfiction titles available including: Daily Writing Prompts To Spur Creativity, I'm Engaged! Now What? and Things Every Goddess Should Know.

She is also the author of the paranormal fantasy series, The Ghost Protector Trilogy. Book one, Ghost Of A Chance, and book two, Ghost Of A Smile, are available now. Book three, Ghost Of A Memory, will be available June 2016.

When her father, Officer Thomas Chang Sr., is murdered, Jenny is thrust into the world of the dead and struggles with her responsibility as a supernatural Protector as well as her new powers. She must face an old evil that is loose in the world and uncover a secret buried in her family’s past. Ghost Of A Chance (The Ghost Protector Trilogy, Book One) by EJ Divitt is a paranormal fiction with a fresh premise. The Chinese mythology incorporated into the story is interesting, particularly about Zhong Kui.

Jenny Chang is easily likable and readers will share her frustrations when trying to take her father's place as a Protector. She mostly has to discover things herself as there’s a lot about her family’s secret that she doesn’t know. A dangerous predicament indeed, as the enemy doesn’t wait for her to get ready. Other characters are also well-developed; Jenny’s mother Catherine, her younger brother Tommy, her estranged grandmother, and many more. Their emotions are real and evocative.

With its short chapters and straightforward prose, the plot of Ghost Of A Chance by EJ Divitt is fast paced, but has enough room for breathing space with some lighthearted moments. On the other hand, there is a sexual assault scene that may be sensitive for some readers. The ending is satisfactory, although perhaps a bit rushed. However, Ghost of a Chance is well-written and well-imagined, worth checking out by paranormal fans. On the whole, this is a solid debut for the series from Divitt and I enjoyed it.