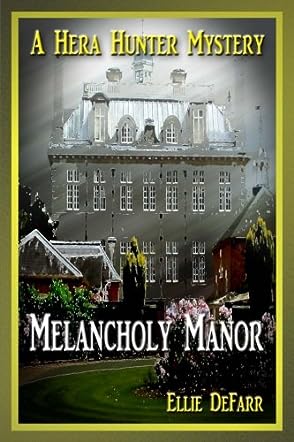 Ellie DeFarr grew up in the surrounds of Pittsburgh, PA, playing in the forested foothills and wading through the streams that flow between them. She attended the University of Michigan, where she earned a Masters Degree in a scientific field so far removed from creative writing that it's mind boggling. After graduation she entered the demanding and fast-paced world of leading-edge technology. But this inauspicious start did not deter her from her love of the written word. She is delighted to be the author of the Hera Hunter Mysteries and is currently hard at work on the next book in the series. If you'd like to know more about her, visit her website, elliedefarr.com.

Melancholy Manor: A Hera Hunter Mystery by Ellie DeFarr piqued my curiosity immediately. It is not often that I find a murder mystery intertwined with a ghost story, but Ms. DeFarr provided both, and with an antagonist I will not soon forget.

Hera Hunter is a woman of many talents and though I do not want to give away any of her surprises, I found very early on that she was once a sniper in the Marine Corps. That pulled me in nicely and as the tale was told, Hera Hunter, who is currently a private investigator, became an incredibly intriguing character. There was also a terrific mix of supporting characters. Ms. DeFarr is a pro at character development. The cast of Melancholy Manor: A Hera Hunter Mystery includes cat burglars, politicians, a brothel owner, a little black dog, and a homeless man. Although I could not identify personally with every single character, I was in turn mesmerized, disgusted with, and amused by each one of them. The story is fast paced and an easy read, but do not be deceived by that. There are more riddles and revelations entangled in these pages than in many books that are twice the length.

I cannot say enough about how much I enjoyed this book. I will be picking up the other Hera Hunter mystery that is currently available, and I absolutely cannot wait until the next one comes out. It is my fervent hope that Ms. DeFarr has at least a dozen Hera Hunter novels up her sleeve.

Private Investigator Hera Hunter doesn't like things that don’t add up. After all, she’s learned the hard way while living on the streets and her time as a Marine Sniper. The question is, why hasn't anyone come forward to identify the Asian woman found dead behind City Hall. Then, another Asian woman is gunned down on the street. While pondering the circumstances she gets a call. Someone wants to hire her. Wealthy socialite Caroline has a problem. Her daughter, Zoey Barnes, is telling everyone that her stepbrother killed the women. Caroline hires Hera to prove her stepson’s innocence. But things get a little strange when she gets a call to come to Caroline’s home known as Melancholy Manor. A house with a dubious past. Caroline claims she hears weeping from those who long ago were murdered in her stately home. Hera doesn't really believe in ghosts, but does think there may be a connection between past and recent killings. And, she also realizes she must find the connection, before anyone else dies.

This book starts off with a bang, literally, as Hera sets out to right a wrong and it just gets better from there. This story has everything; strong interesting characters, a good fast pace and excellent writing which is smooth, easy to read and understand. The author keeps the suspense going throughout until the end when Hera uncovers the truth. I thoroughly enjoyed the story and believe a sequel is in order. Well done.

Melancholy Manor: A Hera Hunter Mystery is a private detective mystery written by Ellie DeFarr. Mrs. Caroline Dunham is worried about her children. Her daughter Zoey has been accusing her step-brother, Kyle, of murdering the two young Asian women who've been found shot in Centreville, but Zoey is temperamental and not very stable, and she's never forgiven her brother for his part in her fiance's death. Mrs. Dunham's nephew, the influential Ellis Foy, recommends the services of private investigator Hera Hunter. Hera's a former US Marine sniper who runs an independent agency with her assistant, Toby, and her little dog, Lucky. Hera is haunted by her past; she watched her father shoot her mother during a heated argument and get away with it when Hera was quite small, and she sometimes uses her sniper skills to carry out justice when the court system fails to do so.

Ellie DeFarr's private investigator novel, Melancholy Manor: A Hera Hunter Mystery, is well-written and fast-paced hard-boiled detective fiction. DeFarr's sniper-turned-sleuth is complex, tortured and very human. While her pragmatic vigilantism made me a bit uncomfortable, Hera is a sleuth whose approach to crime detection is very entertaining indeed. The story line is original and well-plotted, and the characters are finely drawn. DeFarr has several stories going on at the same time in Melancholy Manor, and they all contribute to a first-rate private eye mystery with more than just a touch of crime noir. I enjoyed reading Melancholy Manor: A Hera Hunter Mystery and am looking forward to reading future novels in this detection series.

Melancholy Manor is the second mystery novel by Ellie DeFarr to feature tough private eye Hera Hunter, following Haunting Memories from a Troubled Past last year. This story begins with Hera contemplating the execution - via the sights of her rifle - of a murderer who has escaped justice, and she continues the remainder of her investigations with the same ruthless efficiency. In this book, Hera is tasked by her friend and cat burglar extraordinaire, Gwendolyn Oates, with uncovering the truth about her new boyfriend, and by terminally ill society matriarch Caroline Dunham with exonerating her stepson, Kyle Dunham, of the murder of two young – and as yet unidentified - Asian women after her daughter and Kyle’s step-sister, Zoey Barnes, publicly accuses him of the killings, the latest in a long line of allegations of wrong-doing between the siblings.

Ellie DeFarr’s second book is a serious and enjoyable mystery albeit with some dark themes. Hera is a likeable heroine, with her own strict code of morality, and is surrounded by a cast of three-dimensional characters: her faithful assistant Toby, her foster sister and local madam, Billy, and the squabbling siblings, Kyle and Zoey, plus some murky men of mystery - a new, attractive but creepy cop, a smooth talking art thief and her smart new office neighbour. Not forgetting of course the true star of the book, Lucky the lovely and loyal dog! The plot takes some dark twists and turns and has a thrilling and satisfying conclusion. I very much enjoyed reading Melancholy Manor and look forward to seeing where her adventures take Hera next.